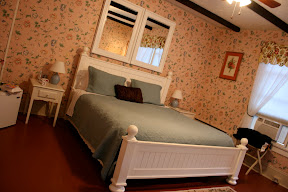 After our time in Roanoke and Floyd, we spent a night outside of Boone, NC, at what met my stereotypes for the quintessential B&B: the Taylor House Inn. We had a room in a charming 100 year old house and ate eggs benedict for breakfast while making small talk with the inn’s other patrons. Our hosts were very friendly and took great care of us.

Our next night was to be spent in Asheville, but we had a long ways to go first. We were reaching the end of the Blue Ridge mountains, and we made a stop at Grandfather Mountain, highest of the Blue Ridge. Grandfather is a privately owned mountain, and feels a bit like a tourist trap. They have a fudge shop to fatten you up before you visit the animal enclosures where you can see bears and a cougar. The animals watched us hungrily.

Near the summit is the “mile high” bridge that stretches from a parking area to a large rock outcropping. It was fairly crowded and touristy, but all that doesn’t detract too much from the views off into the Blue Ridge, which are the real reason to go up there. We were pressed for time, so we didn’t get to do any of the hikes to the true summit. This was probably just as well, because just as we crossed back over the bridge, a cloud rolled in and made the whole place disappear. 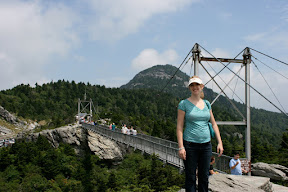 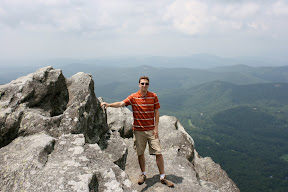 We continued on our journey south, stopping at overlooks when the weather permitted (rarely). We were clearly being followed by storms, so we were unable to do some of the hikes we’d hoped to do along the way (Linville Falls, Craggy Gardens, and Crabtree Falls). Eventually we reached Mount Mitchell, highest point east of the Mississippi, and hoped that the weather would stay clear as we headed up. 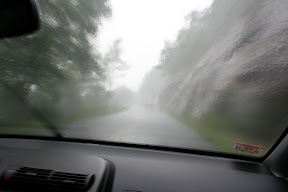 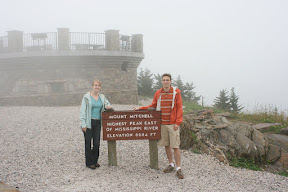 We pulled into the parking lot to the sound of thunder. It did not feel wise to be quite literally the tallest thing on this half of the country during a lightning storm, but luckily the rain held off. We practically ran up the half mile path to the summit where an observation platform gave us a magnificent view of clouds, but not much else. We’ll have to go back some day.

We continued our drive on towards Asheville, NC. After an hour or so, we finally escaped the storms and got the first sunny view of our trip! 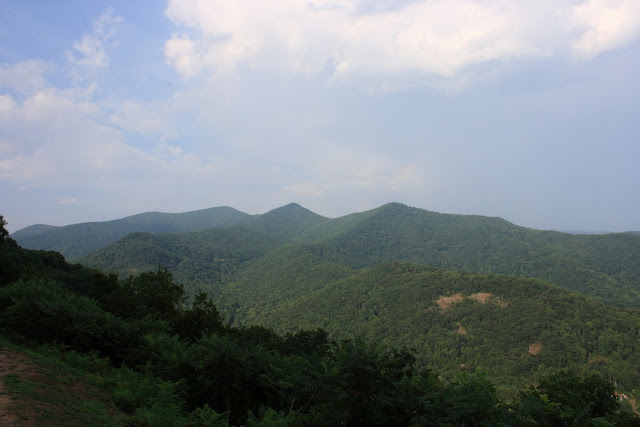 One thought on “Honeymoon 2: Into the Mountains”