This is a long overdue post about the canoeing trip Megan and I took along with a group of my old highschool chums: Chris, Matt G. and Mike. The plan was an overnight trip from Dingman’s Ferry down about 28 miles to the Kittatinny Point Visitor Center. We used Kittatinny CanoesÂ to rent our gear, and they equipped us quite well, except for one key item: we were not given a map of the river including the camp sites along the way.

However, most of us had canoed this same trip at least once before, so we were confident we would find ourselves a campsite for the night. So we set off in a pair of canoes and a kayak. The weather the night before had been miserable, but fortunately the skies began to clear as we headed downstream. 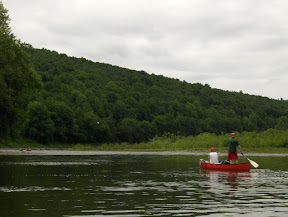 We’d been let off at Dingman’s Ferry along with a busload of other canoeists, including a horde of boy scouts, so we tried to get a quick start and pull ahead of the crowds. Before long, we had the river to ourselves, and we paddled on at a reasonable pace. We stopped for lunch at a large campground which conveniently had picnic tables and bathrooms. The delicious meal of bread, cheese, and salami refueled our bodies, and we sped off again as the boy scout troop, screaming and waving pirate flags, nearly caught up to us.

Typical canoeists we were not. For one thing, we paddled rather than just letting the current carry us downstream. Second, for some reason, beer had been deemed too bulky for the trip since we lacked a large cooler. Instead, we floated down the river sipping whiskey (and large quantities of water as the sun attempted to bake us alive later in the trip). 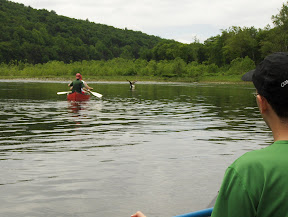 Later in the afternoon of our first day, I spotted a bald eagle perched in a tree on the bank. We slowed our pace to see if it would move, and before long it gave us a nice show: it swooped down from the tree past us and ripped a fish out of the water before returning to a new tree to consume its prize. Take that terrorists! America is AWESOME!

We saw at least one other bald eagle further down the river, however, as the afternoon wore on we began looking more intently for something else: a campsite to stay in for the night. The Deleware Water Gap is a great place to do overnight canoeing because it has dozens of small campsites along the sides of the river, as well as on some of the larger islands. However, the majority of the sites are located in the first half of the trip, and we soon realized that we were well past the halfway point, and that the pickings ahead would be slim.

At the time we didn’t realize it, but at this point we had traveled over 20 of the 28 total miles in our two day trip. Twenty miles of canoeing, even with a moderate current is pretty hard work, and we were getting increasingly tired and desperate as we knew there were both limited campsite options, and a handful of other canoes ahead of us looking for spots. If we slowed down, even more might catch up. 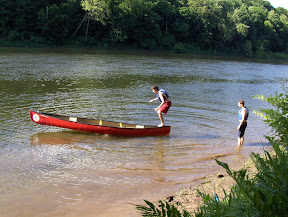 We came upon one of the many small islands in the river. Chris, alone on his kayak, decided to head to the left around the island in search of camp sites, while the rest of us in the other two canoes stayed to the right. We soon realized that the island was much longer than we had anticipated. While almost all of the campsites up stream had clear signs indicating that they were indeed camp sites, the park service apparently decided to not only make the sites on the bottom of the half less frequent, but also less well marked. Megan and I spotted a path on the island, and pulled up our canoe. My investigation found that the island did in fact contain about six different campsites, as well as the fact that it was completely covered in poison ivy. Unfortunately, Chris, having kayaked along the other side of the island was nowhere in sight. Mike and Matt continued paddling downstream hoping to catch Chris at the bottom of the island while Megan and I saved our campsite. About ten minutes passed, and I became increasingly concerned that we would all become separated. I was partially worried about the bears and river pirates who might like to eat us alive, but mainly focused on the fact that all of the food was in one of the other canoes.

Luckily, I soon spotted Mike, Matt, and Chris wading back up along the edge of the island pulling their canoe and kayak. We spent another ten minutes trying to pull the canoes up the absurdly slippery mud cliff that led to our site, but first Mike gave us a demonstration of “Crazy Canoeing”. By some miracle, he did not die. We made camp, eventually built a fire (with the help of some stove fuel since the wood was all soaked from rain), and heated up some chili. We were all exhausted, so we didn’t last long before collapsing into our tents. The next day we were up early, and after a hearty oatmeal breakfast we set off on the rest of our adventure. We knew we were well beyond the halfway point, but we were surprised when we came upon our pullout spot at Kittattiny Point well before lunch time. All in all, a pretty great trip.

A few more pictures, mostly of the bald eagle, are here.